During February holidays, the French Riviera celebrates winter with colored Festivals and Carnivals from Nice to Menton.

Nice Carnival – February 13th to March 1st 2015 The Carnival « King of Music » will show his fans that he has more than one string to his bow and to his guitar! 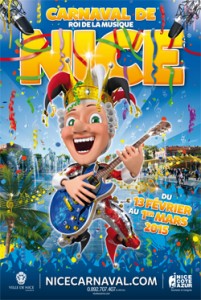 In a unique setting, on the Promenade des Anglais, the elegant « flower battles » are part of the carnival not to be missed. On floats decorated with the most stunning floral compositions, extravagantly dressed characters throw out mimosas, gerberas, and lilies into the public … These giant, colourful parades take place day and night, with entertainment provided by over 1,000 musicians and dancers from across the world. This magical event is not to be missed, at only 15 mn from the Royal-Riviera.

2015 Them : Tribulations of a lemon in China …according to J .Vernes

During the festival, the Biovès Gardens take on dazzling yellow and orange sunshine colours. The decors are incredible, some requiring nearly fifteen tonnes of citrus fruit… Every year, it takes thousands of hours to create these ephemeral sculptures, with the fruits placed one at a time… Go into the Biovès Gardens and discover these giant sculptures made of golden fruit according to a tradition that has been carefully maintained since the start of the last century…
At only 25 mn from the Royal-Riviera. Biovès Gardens, 06500 Menton

My team is at your entire disposal to help you organise your visits.