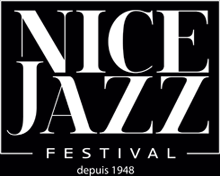 This Jazz Festival was the first one organized in France in 1948, with Louis Armstrong and Django Reinhard as headliners. Ray Charles, Ella Fitzgerald or Miles Davis have appeared regularly in the festival. For 20 years now, Jazz music has been mixed with world and pop music to reach a wider audience.
All Stars, Melting Pot, Rock it, Deep & Soul, et Fire party are the 5 themes of this year’s festival with Keziah Jones, Deep Purple, Metronomy, Joshua Redman quartet, De La Soul band, and many others. Full program.

The real essence of Jazz music is to be found here! At the heart of the Pinède, with the waves lapping just behind the stage, the atmosphere is like nowhere else.

Steevie Wonder, Georges Benson, Joss Stone, Jammie Collum, Gregory Porter… just to mention a few names on the 2014 program. This festival is also famous for its musical discoveries. A large number of musicians or unknown groups performed here as beginners, and came back years later as eminent artists.

This young festival created only 5 years ago has actually become a reference in terms of pop-rock music. French and International artists will performe at the Théâtre de Verdure. This summer: Simple Minds, Morsheeba, Joe Satriani, Skip the Use… it all sounds good !
Full program

The greatest international stars have been coming for 40 years to perform on the famous stage in the “Salle des Etoiles”. With its retractable roof and picture window offering a wonderful view over Monaco, the Salle des Etoiles is still the best place to enjoy a dinner-show with live music on the Riviera. 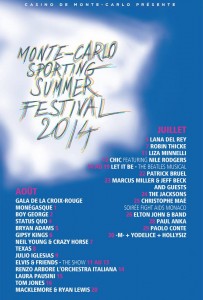 Every year, this music festival takes up its quarters in the Villa Ephrussi de Rothschild. The finest operas are performed by young artists, as the Festival’s stated aim is to reveal the talents of tomorrow. A unique opera festival in an enchanting setting, with this year’s programme featuring : “The Tales of Hoffman” by Offenbach, and Mozart’s “Don Giovanni”.