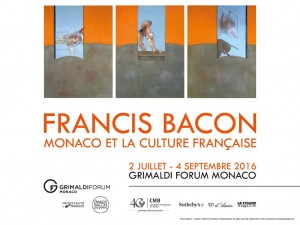 The Grimaldi Forum Monaco has chosen as its theme for the Summer 2016 Exhibition: Francis Bacon, Monaco and French Culture. The exhibition will show over sixty works by the artist making it one of the most ambitious projects lately.

The Grimaldi Forum will present the work of Francis Bacon (born in Dublin in 1909, died in Madrid in 1992, lived in London, Paris and Monaco) from a unique angle: the influence of French culture and his Monegasque period. Major triptychs as well as famous and less well-known paintings will be displayed thematically and will show direct and indirect relationships to France and Monaco.

One of the features of this exhibition will also be to cross-reference major works of the masters who inspired Francis Bacon: Giacometti, Léger, Lurçat, Michaux, Soutine, Toulouse-Lautrec and others.

The works displayed come from public and private collections. They will show the full range of eloquence and force of this monstre sacré’s art. Among those prestigious institutions lending paintings will be the Tate Britain and the Arts Council in London, the Art Gallery of New South Wales and the Centre Pompidou, as well as numerous private collections.

At 25 minutes from the Royal-Riviera