Staying at the Royal-Riviera this summer ? Put Villefranche-sur-mer on your to do list! Full of History, the city is also a place of culture and a source of inspiration for many artists as Jean Cocteau or Charlotte Salomon, in which the city pays tribute with a unique retrospective in France.

Refugee in Villefranche during the Second World War as escaping from the Nazi regime, this German-Jewish painter realized most part of her work here, almost 1,300 gouaches, before being deported to Auschwitz. 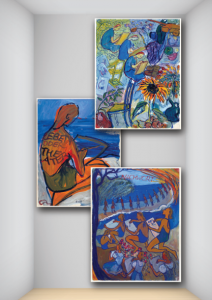 Charlotte’s work is exceptional, as it was imagined like an opera script: on each gouache’s back, the artist noted musical references (classical or popular) designed to highlight the action suggested by the drawing which is displayed to visitors while discovering this exhibition.