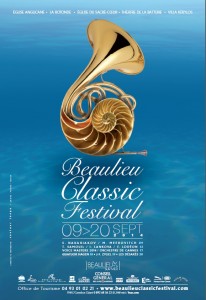 From September 9th to 20th, a new festival is taking place: The Beaulieu Classic festival.

6 nights, everyday in a different historical place, played by the international virtuosos.

With a unique atmosphere at each concert, the Beaulieu Classic Festival is much more than an ordinary classical music event, its a real experience to live. To combine music and gastronomy, each concert will be followed by a dinner with the artists, two of them at La Pergola at the Royal Riviera on September 9th and 12th.

Friday September 12th, 2014
Tribute to Kreisler, the austarian-born violonist and composer, performed by Tatiana Samouil (violin) and Irina Lankova (piano). Tatiana Samouil will play on a stradivarius violin.
The evening will be followed by a dinner at La Pergola.
8 p.m at “La Rotonde”, avenue Fernand Dunan, 06310 Beaulieu-sur-mer

Wednesday September 17th, 2014
The winner of the Monte Carlo Voice Masters 2014 will perform with the Cannes PACA Regional Orchestra a selection of the finest Mozart works.
8 p.m at the Sacré Coeur Church, 30, avenue Général Leclerc 06310 Beaulieu-sur-mer

Thursday September 18th, 2014
One of the most famous string quartet in the world, the Hagen Quartet will play Mozart and Beethoven.
8 p.m at “La Rotonde”, avenue Fernand Dunan, 06310 Beaulieu-sur-mer

Saturday September 20th, 2014
For the 200th anniversary of of Adolphe Sax birth, the saxophone quartet “Les Desaxés” will perform the “saxophonissimo” show, played 1500 times all around the world.
8 p.m at the “Théâtre de la Batterie”, boulevard du Maréchal Leclerc, 06310 Beaulieu-sur-Mer

Each concert is located less than 15 minutes walk from the Royal-Riviera.

Do not hesitate to contact us for more information or to book your tickets.